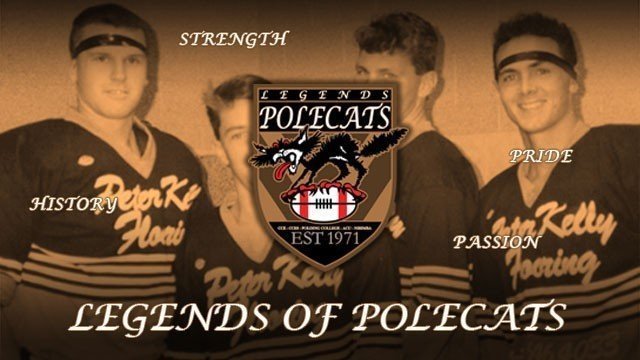 Tell us a bit about yourself. Family? Kids? Where you live? What do you do for a living? Hobbies etc

I am now 52 years of age and have been married to Sheree for 15 years. Have 2 Children, Brent 30 and Jake 17. Brent has 4 children (so yes, I’m a fu*ken Grandfather) Jake still lives at home here in Tugun on the Gold Coast. Sheree and I both have our own businesses. Sheree has a hair Salon in Tugun and I have an Industrial Laundry in Airlie Beach in the Whitsundays where we service Hamilton Island and local hotels and apartments. We employ about 25 people. I also work for a company based in Sydney called Jensen Laundry Systems. I am the Queensland sales manager.Hobbies include mainly Golf which I play about once or twice a week (you would think after playing golf twice a week I would be good but I’m still on 18 handicap). I obviously still love Rugby league, also cricket. Actually pretty much any sport that involves a ball or a bat or an engine I will watch. My wife says to me sometimes” there is nothing on TV” my answer is” Bullshit, turn the sport channel on, someone will be hitting something somewhere”.

Ipso, it’s a long story, not a very exiting story but IPSO was a company I used to work for after I gave up the Panel Beating and spray painting game, I started work for my uncle who sold IPSO commercial Laundry equipment and I used to service that equipment. I had a Van with a big IPSO badge on it, IPSOO7 number plates on it and IPSO badge on my shirt. Every day after work I would go to the Vicar still in my work gear and in those days I didn’t know many people there so the people I did meet and get to know could never remember my name and just called me IPSO ad it stuck, right through the whole football scene. Other players from other teams, referee’s officials, coaches etc all called me Ipso. Nobody actually knew my real name. I don’t get called it in Queensland anymore but everyone I know in Sydney still calls me IPSO.

What years were you at the Polecats?

Not that good with dates but I think from about 1981 to 1995. I played over 100 games, coached reserves for 2 years and first Grade for 4 years. I was playing reserves and coaching first grade at the same time. Sometimes played third grade as well. Some days even played all 3 grades. The best years of football and in fact life that ever had were at the polecats. I made lifelong friends and absolutely loved every day I was involved. I would still be there if I still lived in Sydney.

What was your usual playing position?

Half Back, that was where I started as a kid up until about 1992 when Macca convinced me to try Hooker. I loved it. Best spot on the park. I didn’t know at the time but Macca wanted me to play hooker because he did (everyone used to call me his son). The truth came out long after though, he wanted me to play hooker because I was too slow for Halfback and he wanted someone quicker there.

What’s the best memory of your playing days with the club?

The Best memory of my playing days was actually a third grade game at polecat stadium at Oakhill. I actually got to play in the same team as Macca, Bob Orielly, Danny and Mark Lee from Cronulla and other Polecat legends such as Clem and Mud. Macca of course got sin binned for a high shot. I think Bob Orielly actually dobbed him in to the ref but all I remember was Bob and I pissing ourselves laughing.

The Highlight of my whole time at the club without a doubt was when we won the Grand Final in first grade against Uni of NSW at Peter Hislop Park (in 1994) I wasn’t even playing, I was coach and I think we had one of the best forward packs the uni comp has seen. Guys like Matt Venables, John McDonald, Adam Durrant, Mick Brown, Curtis Clout, Mick Dover, Matt McKeough, Brett Sheldon, Chris Thompson and a few others I may have forgotten right now. These were the hardest forwards I saw in my time in this comp. The best part was Uni NSW were undefeated and didn’t mind letting everyone know. They had beaten us very convincingly twice that season and thought they were a shoe in to win it. We talked about the pressure of being undefeated going into a grand final and how they had everything to lose and we only needed to beat them once. In the first half their playmaker and probably most dangerous player was absolutely smashed by 3 of our guys, with Mick Dover hitting him that late and that hard that the only thing stopped his head exploding was the headgear he was wearing. I think we went in at half time ahead 6-4 and you could sense the pan nick starting to set in. I don’t even remember the full time score but all I know is our plan worked perfectly and the result followed.

Who was the best player you played with at the Polecats?

That’s a hard one. In terms of attacking brilliance Matt McKeogh hands down but he was also the laziest bastard I ever played with. For all round toughness, organising skills (defiantly not speed) and the ability to stick to a game plan and execute the things we needed at the right time Mick Dover would be the one I would pick.

Who was the team you loved to hate?

Uni NSW (see above) we hated them and they hated us. Problem was they couldn’t beat us when it counted most.

Who was the biggest pest at the club?

Mmm!! I’m going to have to say Hairy, closely followed by Mick Brown and Phil Host (now they are 2 sick men)

Hairy was just annoying, he used to run the barbie but was smashed by half time in reserve grade every week. This then often resulted in him losing count of the money or getting confused between what was his money and what was the clubs money.I don’t need to say anything about Hostie or Brownie, those of that know them, know exactly what I’m saying. (Sick Men)

Who was your biggest influence at the Polecats and Why?

I have to say Macca (John McMartin) he gave me confidence in my ability both as a player and more so as a coach. He taught me more than anyone ever has. “he was like a father to me” the boys will love that!!!

In hindsight, were you as good of a player that you thought you were? And

Of course not, isn’t that everyone’s answer, unless of course your name is Mick Brown then he would answer in the affirmative.

The best bit of advice you have ever been given?

Probably not the best but maybe the funniest was once at half time when we were getting smashed I said to Macca. “What are we going to do now” his answer “punt high and follow on mate, we are fuc*ed”

If you were down to your last $10 what would you do with it?

10 bucks doesn’t get you much so I guess I would grab a mate and shout him a beer.

Which person would you least like to sit next to on a plane and why?

Matt McKeogh, he’s annoying, the only thing worse would be to be in between him and Hairy!! With Hosty behind you ( never let Hosty get behind you)

What is the best bit of advice you have ever had?

Not so much advice but a saying my business partner and I have ever time the shit hits the fan and it goes like this “We the unwilling, led by the unqualified, for so long have done so much with so little, we will now attempt to do the impossible with nothing”

And lastly…. will you be at the Legends of Polecats Reunion?

For all the details about the upcoming Legends of Polecats Reunion click here.