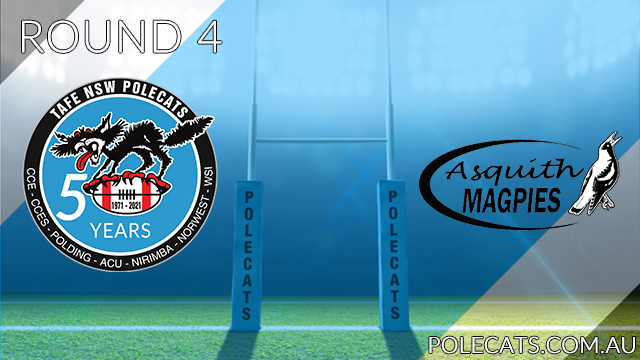 The TAFE NSW Polecats have been handed a hiding at the hands of Asquith Magpies in Round 4 of the Saturday Metro League.

With the Polecats down by 12 they needed a good start, but it was the opposite as Asquith stacked on another 18 points in quick succession. Polecats winger Jesse Fuller crossed out wide for an unconverted try, but Asquith weren’t done crossing again 2 twice before the full time bell saved the Polecats from anymore harm, defeating the Polecats 46 points to 10.

While the Polecats pride was bruised, they also took a huge injury toll out of the match with 5 serious injuries including a broken ankle to club stalwart Keith Weston, who will require surgery.

So with the Polecats having a bye next week to lick their wounds, the club wishes the best to Westo and all the other stars who took an injury out of the match.

After 7 Rounds here are our current stats leaders, for...

After 7 Rounds here are our current stats leaders, for rest go to https://www.polecats.com.au/player-stats/?season=2021_players #gothepolecats