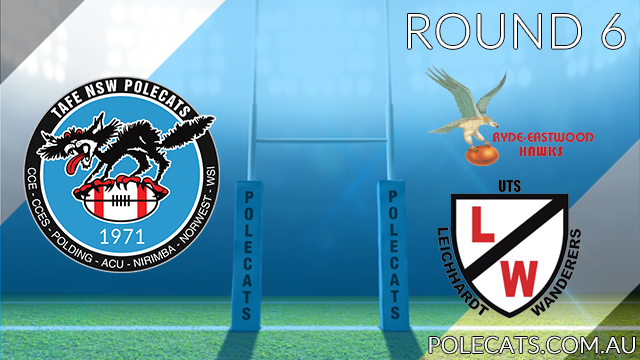 The Polecats 1st Grade side have continued their matching winning form under moonlight at Kellyville Park last Saturday, while Second Grade had a tough day in the park losing to old foes UTS.

With the sun setting, the moon rising and mercury dropping the Polecats 1st Grade side started slow allowing Ryde Eastwood to get the early jump on them with 2 tries in the first 15 minutes, giving Ryde Eastwood a 12 point to nil lead over the Polecats. The Polecats hit back 9 minutes later with a cheeky try from hooker Tom Watson and when Noah Smith converted the Polecats were only down a converted try. With only minutes left on the clock before halftime, Watson barged over again and when his second for the day and the Polecats took a slender 2 points deficit into the break.

After the break, the Polecats had a horrible start after knocking on off the kick off, which allowed Ryde Eastwood capitalised out wide to extend their lead over the side. Behind by 6 the Polecats Dean Milroy lit a fuse when he crashed over under the post, that set the Polecats on a unanswered 20 points run with 3 more tries coming from Tom Watson, Alfred Iva and Shane Matthews and with Noah Smith finishing the day with 6 conversion in total the Polecats had a comfortable 36 points to 16 victory over the Ryde Eastwood.

“We showed great character to not panic and lift our energy levels in response to a slow start. Really happy with the way the boys played especially in that second half.” Dan Jackson Polecats First Grade Coach.

In our 2nd Grade match against old foes UTS, the Polecats started well with Caanan Te Whare giving the side an 6 points lead after the first 9 minute. After the good start it all went horribly wrong for the Polecats, with UTS putting 18 unanswered points on the Polecats and the side went into the break down 18 points to 6.

After the break Caanan gave the Polecats a glimmer of hope scoring 7 minutes into the half, but UTS hit back with 3 more tries, to take out the match handing the Polecats a 30 to 10 points beating.

“Bit of a reality check for the 2nds today all the things we didn’t do well can be easily fixed with a better attitude and willingness to do some hard work on & off the field.” Second Garde Coach Damien Riddle.

The Polecats now have a week off for the long weekend before the full draw is released.

Polecats RL · 5 days ago
@polecatsrl
Round 9 Washouts, see which matches have been washed out at    https://t.co/OhppumOyKr
View on Twitter
0
0
Follow @polecatsrl

Unfortunately our 2 matches today were washed out, stay dry...